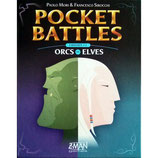 The second in the Pocket Battles series. This time we go fantasy as elves and orcs clash for supremacy.

To play Pocket Battles, first you must agree on the size of the armies. Then you create your own army from among the available troop tiles: this is a very strategic part of the game. Combat comes next and it is fast and bloody. There are three sectors comprised of 15 zones that one can fight in. Thee are range and melee attacks, charges and some units even have special abilities (which are described on the player aids).

Pocket Battles is a wargame that easy to learn, inexpensive, fast, portable and requires minimum table space! You can also use the armies here to fight armies from other Pocket Battle games: Elves vs. Romans, Orcs vs Celts!

Pocket Battles: battle, strategy, and victory, just by reaching into your pocket!