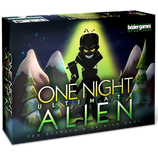 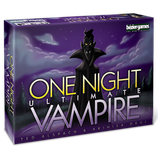 In One Night Ultimate Vampire, the sun has just set, and vampires have descended on your sleepy little town, slowly turning the villagers into even more vampires. Fortunately, the village has several residents with special powers, with most willing to help eliminate this fanged menace!

One Night Ultimate Vampire is a fast game for 3-10 players where everyone gets a role: The nefarious Vampire, the well-meaning Cupid, the sneaky Assassin, or others, each with a special ability. In the course of a single evening, your village will decide who among them is a vampire... because all it takes is finding one vampire to win! 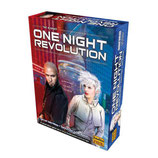 One Night Revolution is a super fast game of secret identities for 3-10 players that combines all the deductive and chaotically fun elements of the One Night Ultimate Werewolf series with more structured game play. The result is a very addictive game that is easy to learn and will be played over and over again.

Every player starts with a specialist role and an ID (either Government Informant or Rebel Fighter). At night the Informants reveal themselves to one another — assuming any exist, that is, as at all player counts between zero and three Informants are in play — then all players complete their specialist action in a clockwise order (removing the need for a rigid script/app and reducing the potential to accidentally reveal your role). Specialist actions include gathering information, switching roles, and helping players in their attempt to identify the Informant(s) before the day is over. If a majority of players identify an Informant, the Rebels wins — but if the Informant(s) remain hidden, they win!